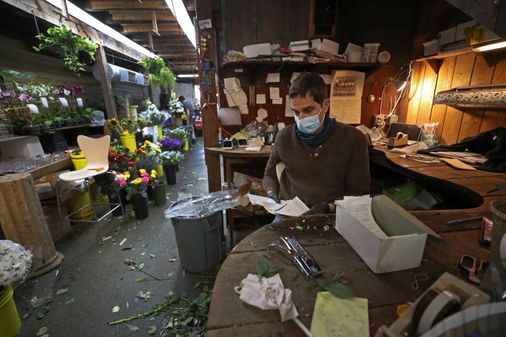 When Brattle Square Florist announced its impending closure in late December, it seemed like a moment of mourning for loyal patrons of the 105-year-old Harvard Square institution.

Many were in disbelief that the store would disappear on January 31. Some started paying tours to browse the flowers while they still could. “I could line a room with the notes, letters and cards we received,” longtime manager Stephen Zedros said.

But it turns out that reports of Brattle Square Florist‘s demise were premature, or at least not the final word: the business will be keeping its doors open at a new address.

Zedros will take over as owner starting Feb. 1 and move the store down the street to 52 Brattle St. in March. He said the decision was inspired by the outpouring of community support and the need for Zedros to maintain his family legacy. (His grandparents opened Gomatos Brothers Fresh Produce in 1917, which later led them to found Brattle Square Florist.)

In a press release, he wrote that “returning Brattle Square Florist to my family is a dream come true. The energy of Square keeps me going and being able to watch my customers grow with their own families is one of my favorite things about running this store. »

Not much will change in how the store works.

Zedros will replace current owner Randy Ricker, who will retire next week after running the store for nine years. Brattle will continue to sell cut flowers and fragrant plants, filling orders for bouquets for weddings, funerals and other occasions. The new space is smaller, Zedros said, “but beautiful” with two stories and a quaint storefront.

He also plans to limit the florist’s delivery radius. “It will be closer to Cambridge,” he said. “Deliver to Quincy or Milton – we may not have the bandwidth to do that anymore.”

Ricker told The Globe earlier this month that the store was facing increasing challenges. Over the years, flowers have become harder to source and profit margins have shrunk. He’s dealt with hiring issues and the store needs renovations. The request for Valentine’s Day flowers would have been difficult for him to meet, he said in a Dec. 27 email.

“The prospect of continuing operations during an ongoing and unpredictable pandemic is daunting,” Ricker said.

Nevertheless, Zedros said he was optimistic.

The “traditions of the florist, as well as the traditions of my own family,” he wrote, “will henceforth live on.”