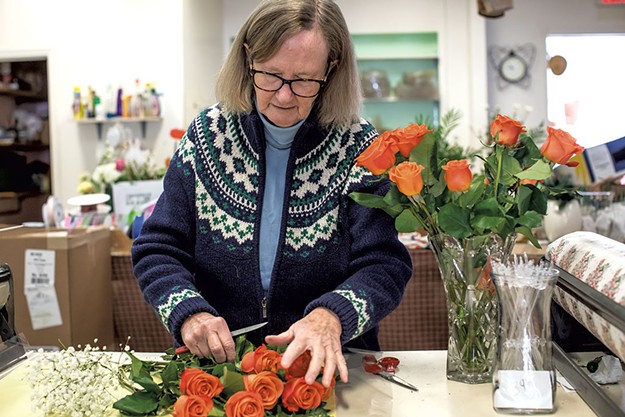 At the only florist in Winooski, the rhythm of the year is marked by flowers: roses for Valentine’s Day, lilies for Easter, spring bouquets for Mother’s Day and carnations for the prom corsages. Sally’s Flower Shop‘s annual cycle ends with a festive poinsettia display. Jars of dark green leaves crowned with bright colors – crimson, pink and fuchsia – all herald that Christmas is here.

This season, wreaths and ornaments adorn the Main Street store, and teddy bears are adorned with red ribbons. A dove figurine springs from a bouquet of red carnations and mini poinsettias, accompanied by white Christmas mums, pine cones and greenery.

Normally, Sally’s annual cycle would resume in January and continue until the busiest flower festival of the year: Valentine’s Day. But not this year. The remaining wreaths will be wrapped with spools of ribbon, empty vases and stacks of papers – and owner Sally Tipson will be shutting down her shop for good on Christmas Eve.

Tipson, 77, opened Sally’s with her late husband, Skip, 29 years ago. â€œIt’s about time,â€ she said. “I got to the point where I knew I couldn’t do it anymore. The body doesn’t want to move anymore like it did 10 years ago, 20 years ago.”

Tipson is a longtime resident of Winooski whose contributions to her hometown extend far beyond running a flower business. She served on city council from 2009 to 2015 and was deputy mayor for four of those years. She chaired the board of directors of Winooski Food Shelf and served on a restorative justice panel.

In 2004, Tipson launched an initiative called Season’s Greetings, for which volunteers team up to decorate the city for the holidays. This good-humored effort continues today and includes the annual October Pumpkin Festival, in which hundreds of candlelight lanterns light up Winooski.

â€œIt takes a village,â€ said Chris Frenette, a friend of Tipson’s who works part-time at the flower shop. “And Sally is the leader of the pack.”

Sally and Skip Tipson had no plans to go into the flower business in 1984 when they visited Floral Emporium, a flower wholesale business in Winooski. Sally ran a domestic ceramics workshop with her neighbor; the couple were looking for a new location to develop this business. Instead, the Tipsons decided to buy Floral Emporium itself.

â€œIt was an adventure,â€ Tipson said. “It was completely on the job training. I don’t know if I would do it again: just jump in and get your feet wet.”

The Tipsons ran Floral Emporium for eight years before moving a few blocks north on Main Street. There they changed the name of the business to Sally’s Flower Shop and turned it into a retail store. Together, the couple raised sons Scott and Kyle and ran their small business. Tipson has owned and operated the store since Skip’s death in 1995.

Tom Brennan, a former University of Vermont men’s basketball coach, was a loyal customer of Sally’s Flower Shop. â€œThis lady is an angel,â€ he said of Tipson.

â€œWhen I was at UVM, I always got into traffic and had to send flowers to people,â€ Brennan continued. “Originally, flowers were just mea culpas.”

They have become more than that for the recipients. â€œHis arrangements were so spectacular that I never sent flowers to anyone when they didn’t say, ‘Oh, my God. I have the most beautiful arrangement,’â€ said Brennan.

A sufficient supply of flowers, sourced from South America via Green Mountain Florist Supply in South Burlington, keeps Sally in bloom year round. Tipson herself loves to bring home tulips in the winter – in all colors and for no occasion. â€œThey are elastic and happy,â€ she said of her favorite flower.

But the defining characteristic of Sally’s Flower Shop is “more than flowers,” Tipson said. “That’s what flowers do for people. They bring joy. They bring happiness.”

Flowers also bring beauty and meaning to occasions such as weddings, birthdays, and graduations. Tipson has found it especially rewarding to provide flowers for the funeral.

â€œI really like the funeral work,â€ she said. In years past, this could have meant providing a large number of flowers for vigils that lasted two days. Nowadays, flowers for a funeral could be a piece at the front of a church.

â€œThe most difficult people to work with are those who have lost a child,â€ Tipson said. “Sometimes you just have to listen.”

Tipson, the youngest of Ethel and Fred LaFerriere’s three children, grew up on Franklin Street in the first of Winooski’s three homes where she has lived her entire life. Her father worked in the woolen mill and her mother was a cook at Trinity College.

Thanks to his mother’s work, Tipson was entitled to free classes at Trinity. She graduated from there with a teaching diploma in 1966 and returned to her alma mater, Winooski High School, to teach.

This is where Tipson first met Frenette, who is now his employee; she was Frenette’s social studies teacher. The 68-year-old former student has fond memories of field trips with Tipson, and she recalls Tipson’s interest in teaching teens about the risks of alcohol and drug use.

The store has always been a place Tipson could get involved in her community work: she kept a cooler for donations to the food shelf and made candles to place in festival pumpkins.

â€œWinooski is a very special place,â€ Tipson said. â€œWhen I was growing up everyone knew each other and people took care of each other. Things changed a lot, I lost a bit of that [small-town] atmosphere.”

But Tipson has a knack for bringing people together and balancing the needs and interests of new and old Winooski residents, according to Sister Pat McKittrick, an outreach nurse at the University of Vermont Medical Center. She has worked with Tipson on several community projects, most notably as a member of the Food Board.

“Sally is an amazing member of the community … [who] was interested in making a difference for everyone, â€McKittrick said. â€œHe’s the kind of person who would roll up their sleeves and go to work.

For his part, Tipson hopes to find a buyer for the company in order to keep the only florist in Winooski alive. This week, she’ll stock poinsettias and holiday centerpieces, make bouquets, and fill online orders. On Christmas Eve, Tipson will close shop at noon one last time and return home for a family reunion.