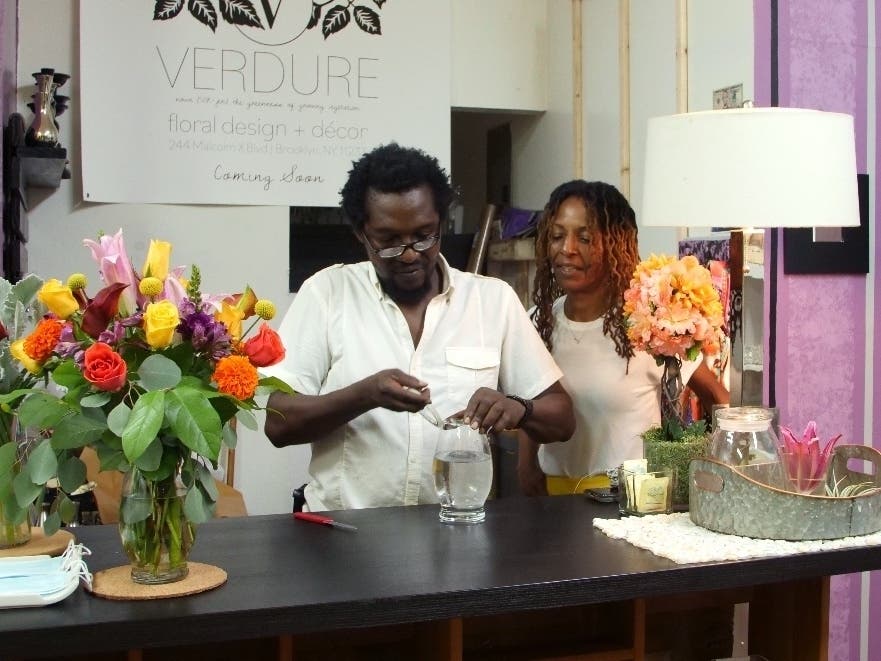 BED-STUY, BROOKLYN – Verdure Florist may have just opened in Bed-Stuy, but in reality the store has been around for three decades, seven children, and a love story unique to New York City.

Florist Malcolm X Boulevard, located near Hancock Street, was opened by husband and wife duo Olga and Dezzie Ligon, whose wedding revolves around a flower-inspired reunion 32 years ago.

At the time, Dezzie was working at his father’s plant store in downtown Brooklyn, as he had been since he was 14. Olga had just moved to New York City from Oklahoma, she told Patch.

“One day Dezzie saw me walking down the street. He immediately ran out of the store, grabbed a rose and handed it to me,” Olga recalls. “I remember thinking it was very kind of him but also weird. Things like that never happened in Oklahoma!”

The cute encounter would boost the start of Olga and Dezzie’s relationship, which ultimately led to marriage and their seven children.

And now, three decades later, the origin story has inspired their own florist.

Verdure Florist has been operating under a phased opening since September and will celebrate its grand opening next week in the storefront at 244 Malcolm X Boulevard.

Customers who stop by can find a wide selection of flowers, bouquets, pre-made arrangements, pillows that Olga has sewn together and, of course, love, the couple said.

“The store is a great addition to the community and brings tranquility, color and love to the neighborhood,” said Olga. “All we want to do is show the unity of the neighborhood while letting them know that love still exists.”