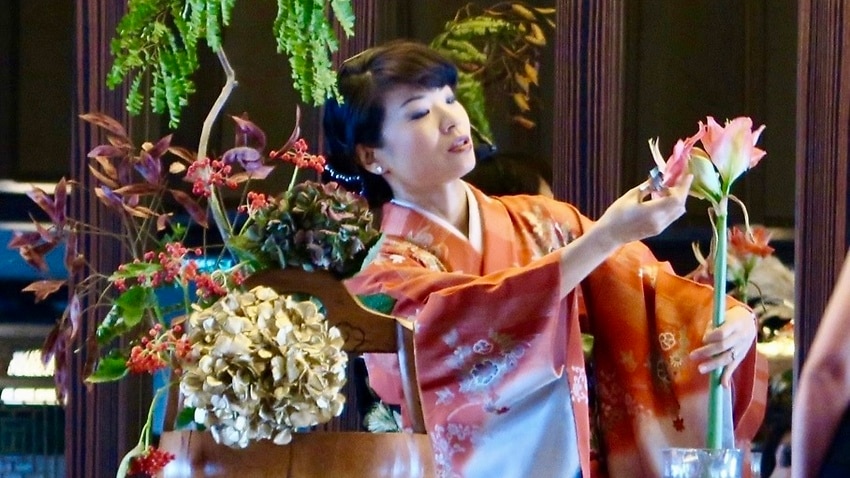 Ms. Prado learned the trade in Tokyo and taught it in Hong Kong and Singapore before moving to Sydney. According to Ms. Prado, a certified teacher from Sogetsu School believes that one can express oneself freely with flowers while respecting and valuing one’s tradition.

Sogetsu Australia will organize an exhibition “Awakening Ikebana Sogetsu“at the Royal Botanical Garden in Sydney this month, 4-12. There are free workshops and demonstrations on weekends.

In the audio, Ms. Prado talks about the difference between Ikebana and Western flower arrangement, its upcoming exhibition, and the history of Ikebana in Australia.

Ikebana was brought to Australia by Australian performer Norman James Sparnon about 60 years ago. Mr. Sparnon helped his non-Japanese speaking US-born wife learn Ikebana in Tokyo in the 1940s. Then Mr. Sparnon found himself getting on the craft. He learned Ikebana at both Sogetsu School and Ikenobou School and achieved the highest rank as a teacher in both schools.

After returning to Australia in the 1960s, Mr. Sparnon actively spread the Ikebana throughout Australia and even brought it to New Zealand. Currently, Sogetsu has its branch in every state and territory except the Northern Territory in Australia and five branches in New Zealand. El Paso Florists Impress With Their Floral Arrangement For Les Do