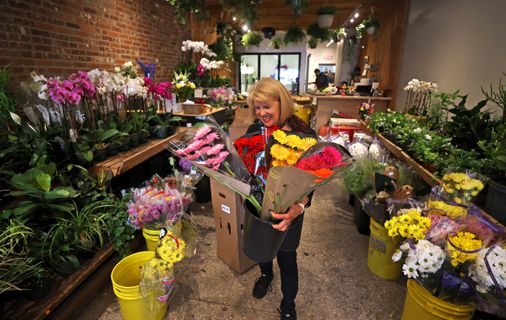 Several months after Brattle Square Florist was scheduled to close, the beloved florist opened in a new location just steps from its old storefront.

Longtime manager and new owner Stephen Zedros said he worked until 11 p.m. the day before to prepare for Wednesday’s grand reopening at 52 Brattle St. in Harvard Square.

“It’s the perfect place,” Zedros said. “I think we landed in the right place. There are also a ton of mom and pop stores in this area so it feels like old Harvard Square.

The new location, just two blocks away and across from the old one, is the latest development in the florist‘s 105-year history, which began when Zedros’ grandparents opened Gomatos Brothers Fresh Produce in 1917. It later became Brattle Square Florist, and over the years the shop has become a mainstay in the Harvard Square community.

Zedros said while it was difficult to break the news of the move to customers who had visited the 31 Brattle St. site for decades, many customers were happy the florist remained open.

In late December, former owner Randy Ricker announced that Brattle Square Florist would close due to rising costs, labor shortages and uncertainty caused by the pandemic. Inspired by his family heritage and community support, Zedros decided to become an owner in early February.

Elements of the florist’s old location remain in the smaller 1,200-square-foot store, including its classic brick facade and hanging plants. An hour after the new spot opened, the store already had nearly 15 customers, Zedros said.

“[The customers] are incredibly loyal and supportive people,” he said. “Being able to keep the place alive and keep the store running was my priority, and it worked.”

Supply chain issues and skyrocketing costs for some flowers persist, Zedros said. But he remains optimistic for the store’s next 100 years, with the goals of “keeping everyone here employed and keeping [Brattle Square Florist] the way it was before.”

Annie Probert can be reached at [email protected]