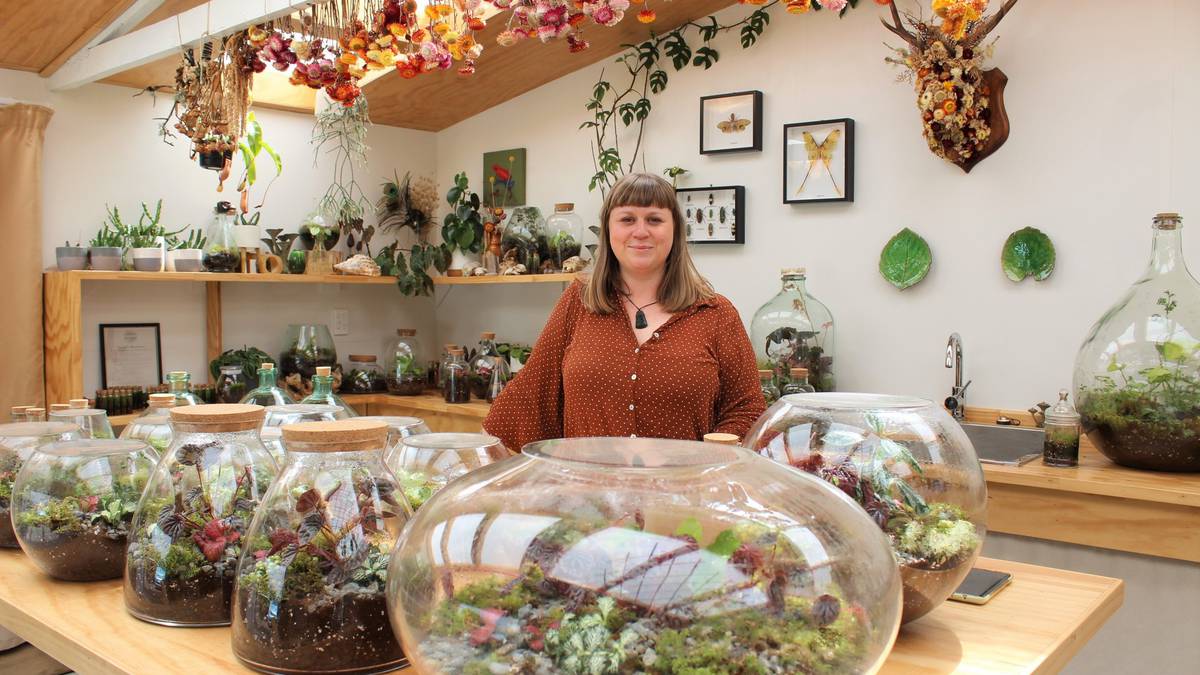 Drawing, picking, playing and planting flowers from a young age, Rose Lawson uses this year’s Kāpiti Arts Trail to state that she is indeed an artist and that she is successful.

Creating terrariums of all scales, Rose creates living oases that last for years with little maintenance.

“My grandfather ran the Wellington Botanic Gardens tearoom, which has the large greenhouse next to it.

“So when I was a kid I spent a lot of time in this in absolute heaven.”

After moving to Melbourne and working for a few top florists there after studying floristry, one of them asked Rose if she wanted to start making terrariums for sale.

“I just got completely obsessed and couldn’t stop doing it.”

Leaving Melbourne, Rose went on a jungle expedition traveling the world, visiting the jungles of the Amazon in Costa Rica, Borneo and Panama.

“It was incredibly awesome – it couldn’t have been more of my jam, it was really cool.

“Melbourne was so easy to find work, you got paid more, I thought there were so many opportunities, and I thought New Zealand had it for me?

“But I came back and I was like New Zealand had it all – I wasn’t expecting it.
“I discovered that there are loads of opportunities in New Zealand.”

After her background in setting up terrariums in Melbourne and visiting jungles teeming with nature and wildlife, Rose started Jungle Botanics, a small business selling part-time terrariums in New Zealand.

“I thought I saw how it was and found out that no one else was doing it, so it grew from there.”

She quickly found out that starting in her spare bedroom was a terrible idea as dirt and broken glass spread all over the place, so after a team effort to renovate the garage, Rose is now working from her garage studio on Robert Grove. , Paraparaumu.

“The opening timing of Jungle Botanics was really good.

“I opened in New Zealand over two years ago, when everyone was becoming obsessed with houseplants.”

Not only has she started a successful business, but by opening her studio for the first time at the Kāpiti Arts Trail, Rose proves to herself that she is an artist.

“I dropped out of fine arts school after a year and a half.

“I really had impostor syndrome so I gave up and became a florist.

“From there, I kind of feel like a creative failure.

“The Kāpiti Arts Trail is my chance to be recognized as an artist.

“I make money from my creative efforts and I should let go of my feeling of failure.

Opening her studio to the public for the first time, Rose said, “I can’t wait to have two weekends of people coming and hanging out.

Rose also works at The Wilderness, a florist in Paraparaumu Beach twice a week, just because she loves it.

“I could probably do Jungle Botanics full time, but it’s a really nice place to work and nice people.

“It’s good to have variety and balance.”

Jungle Botanics will be open during the Kāpiti Arts Trail in November at 3 Robert Grove, Paraparaumu.