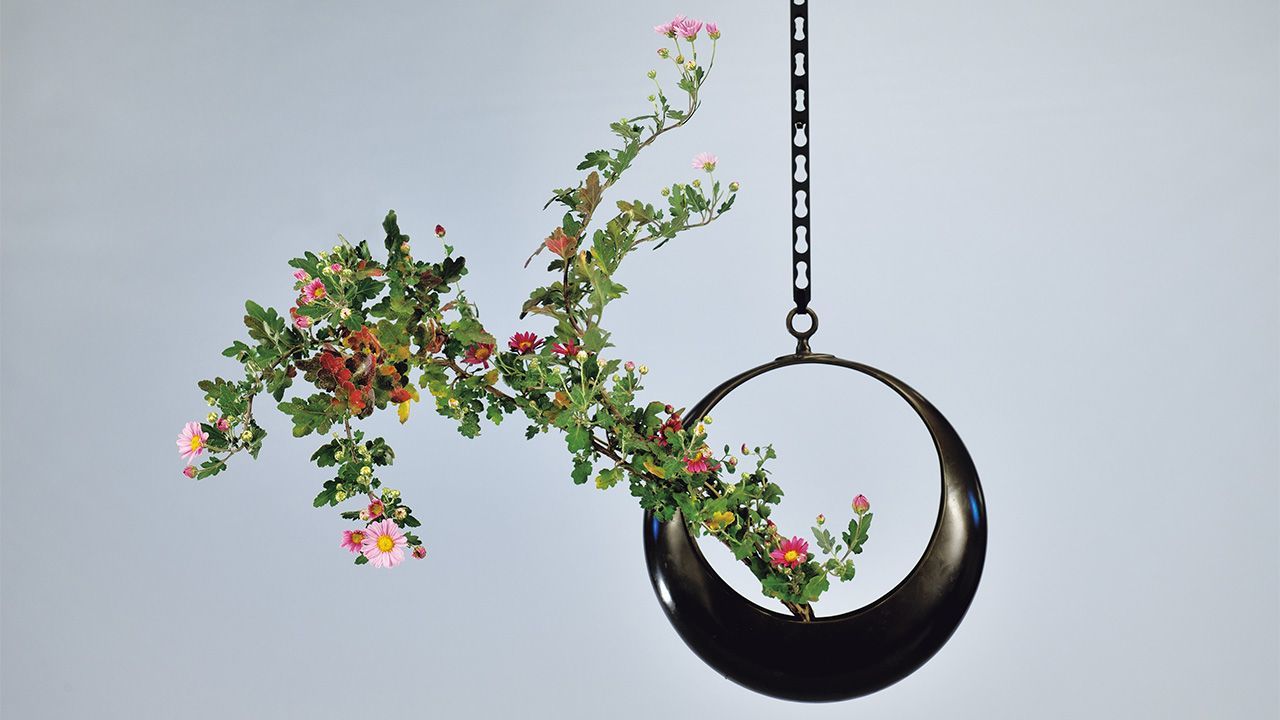 The age-old art of ikebana combines flowers and other materials in arrangements that express a relationship with the surrounding space and aesthetic elements such as the seasons. The art form, which ranges in styles from modern to traditional, enjoys popularity in Japan and abroad.

Japanese flower arrangement, known as ikebana or kado (the way of the flower), became a distinctive art form in the late 15th century. Today there is an array of styles and variations, both modern and traditional. Ikebana is distinguished from other forms of floral arrangement by the positioning of flowers, stems and other plant matter in relation to the container and surrounding space. Ikebana arrangements can be large, complex displays combining several elements, or small, simple affairs, depending on the style of the room.

Ikebana is a popular pastime, and works can be found in formal settings like banquet halls, traditional inns, and corporate meeting rooms, as well as public spaces like department stores and offices. municipal.

The ikebana emphasizes the harmony between the different elements which, along with seasonal plants and flowers, can also include dried branches, stones and even moss, meticulously arranged in a ceramic container, glass , wood, bamboo or metal. Traditional craftsmanship expresses beauty through subtle detail, with components reduced to their most basic forms. 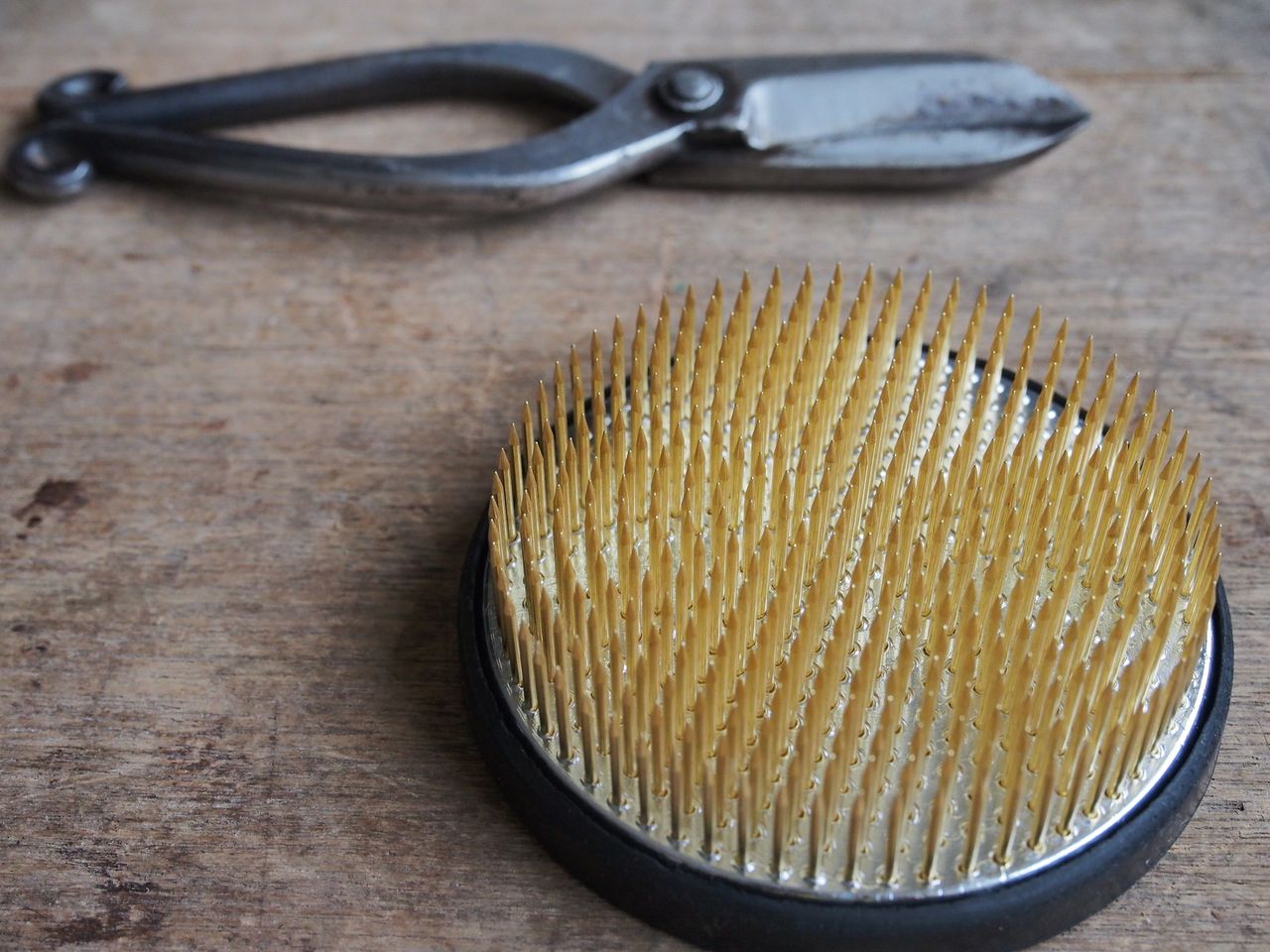 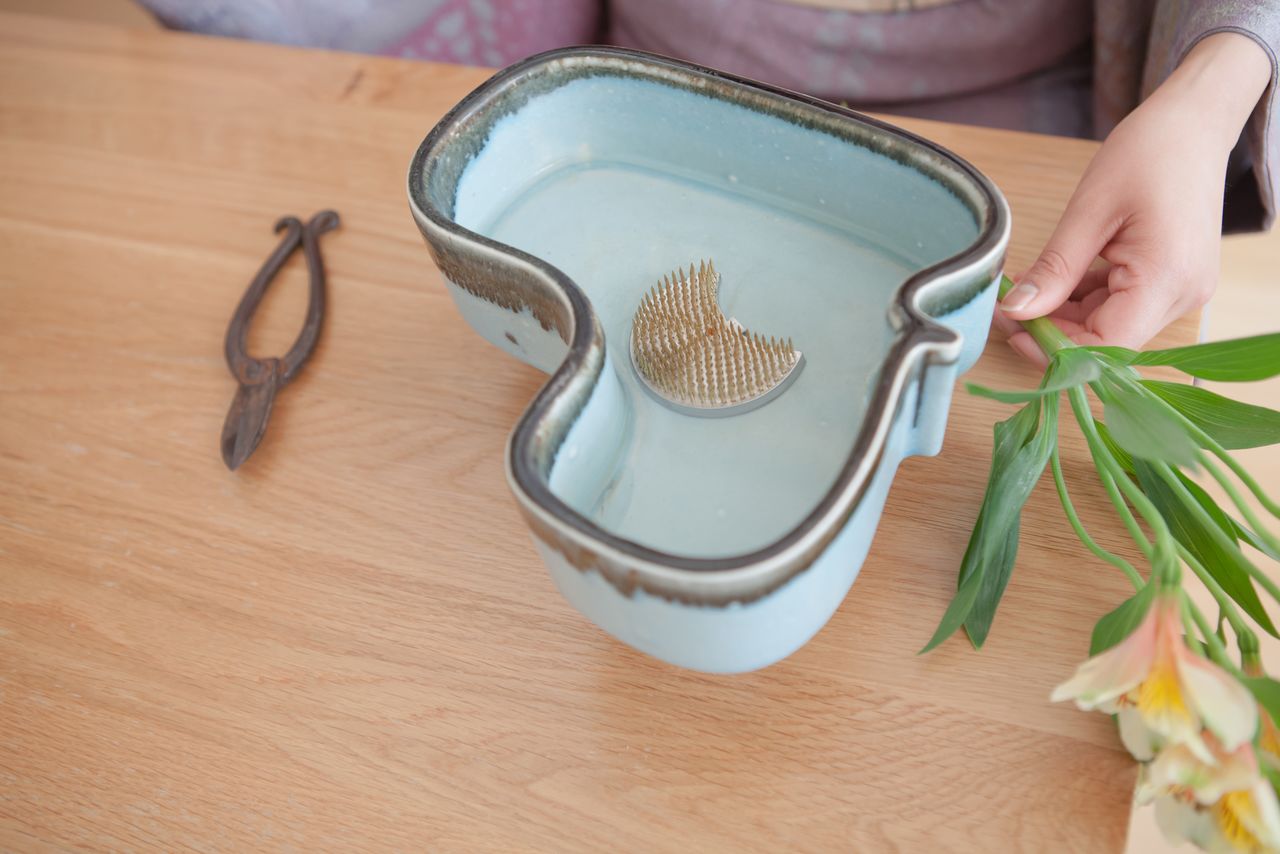 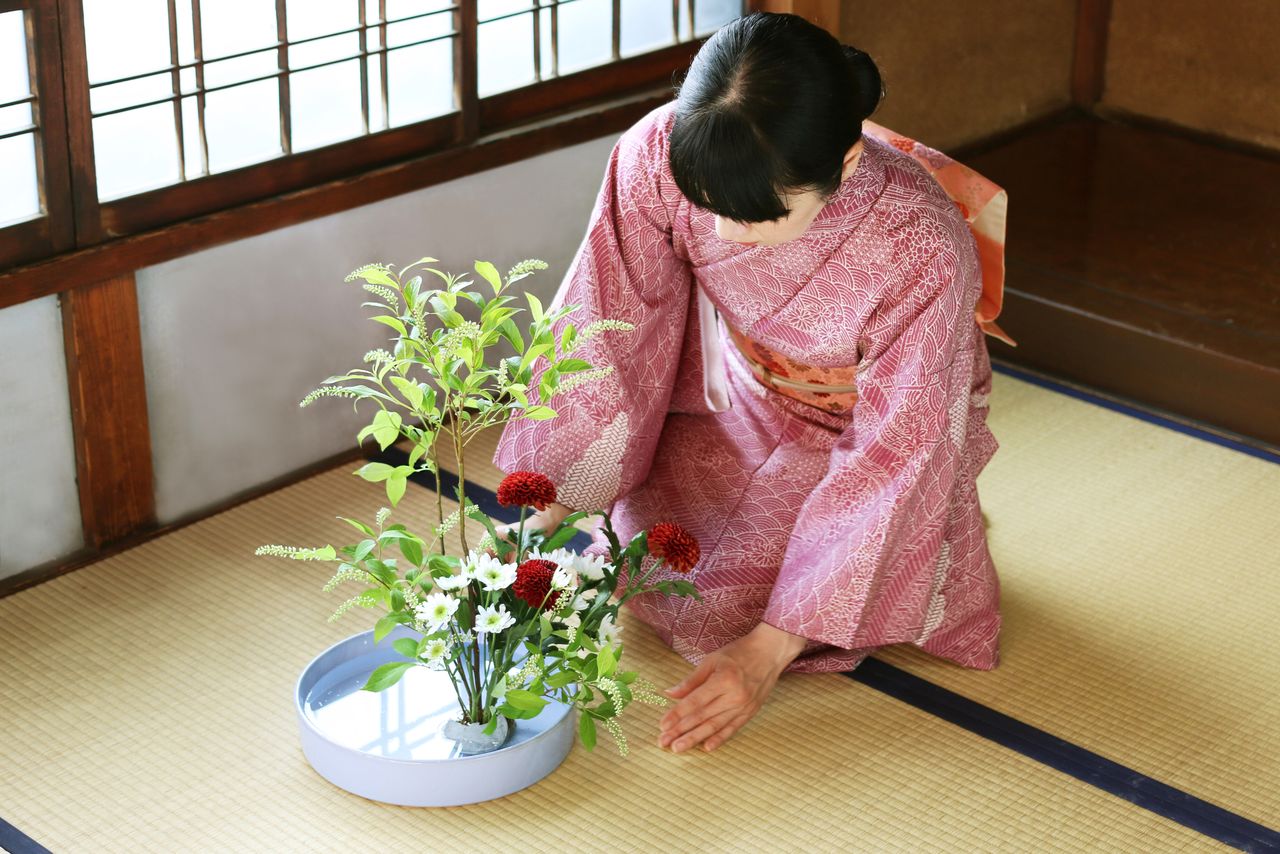 Ikebana developed during the Muromachi period (1333-1568) and is thought to have its roots in Buddhist flower offerings, a custom that dates back to the 6th century in Japan. Early arrangements were used to decorate tokonomean ornamental alcove characteristic of the residences of aristocrats built in the shōin-zukuri style of architecture.

Tea master Sen no Rikyū (1522-1591) raised sadothe Japanese tea ceremony, into a refined art form by the end of the 16th century, giving rise to the related art of chabana (tea flowers). He saw the expression of nature as essential to sado and pointed out that the flowers should be arranged to appear “as they do in a field”. Chabana adorning the alcove of a teahouse are usually austere pieces arranged to reflect the season or the taste of the guests, and their development had a great influence on ikebana. 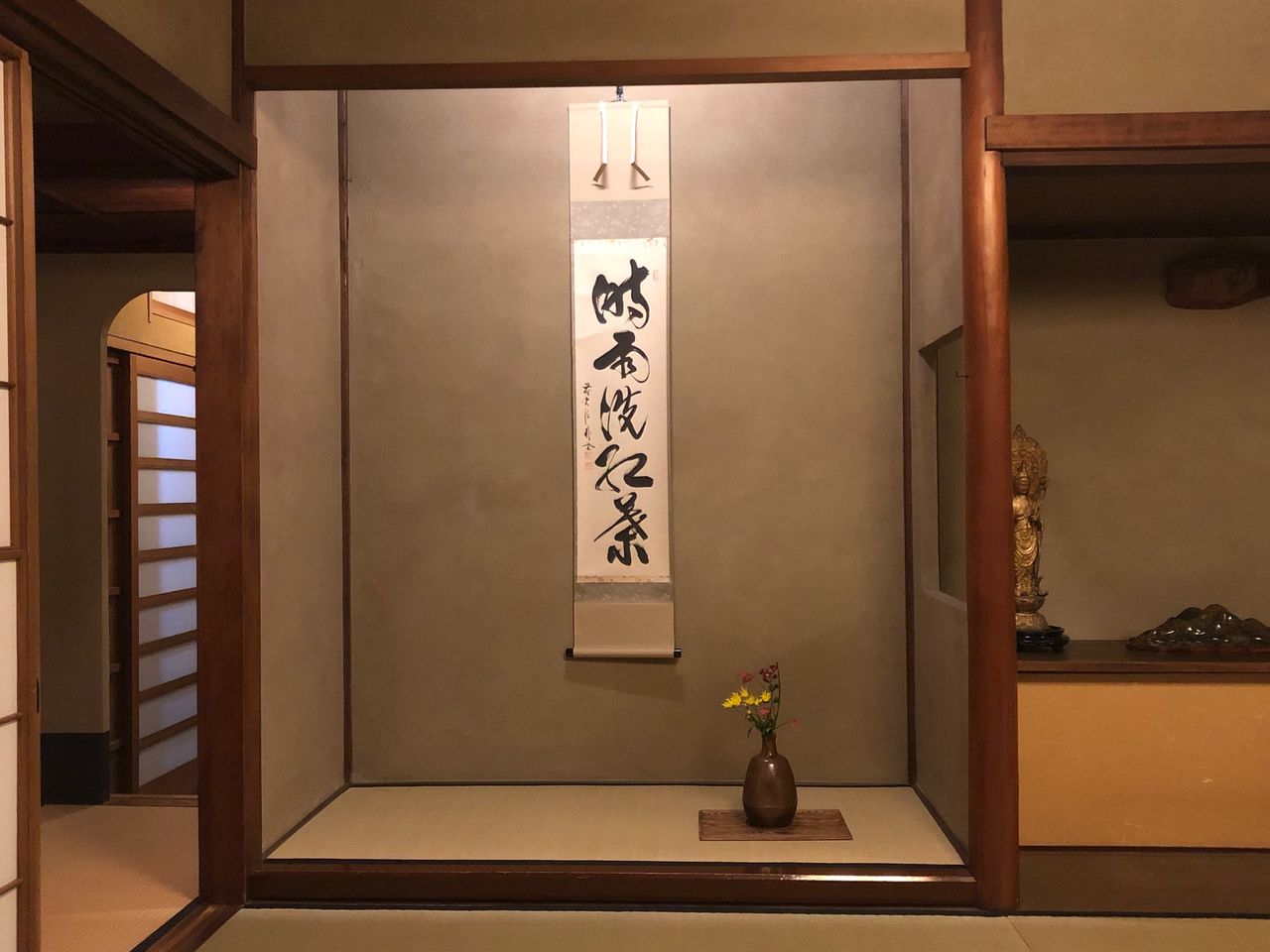 A chabana (tea flowers) and a hanging scroll decorate a tokonome.

A proliferation of floral masters around the mid-17th century helped establish ikebana as a distinct art form. Ikenobō, the oldest and predominant school of flower arranging, was created by Ikenobō Senkei, a priest of the Muromachi period who practiced under the patronage of the aristocratic class. His disciple Sen’ō developed the art, insisting that flowers should not be admired for their beauty alone, but that arrangements should include symbolic elements, such as a withered stem or twisted branch, which represent the greatness of nature. Author Kawabata Yasunari referred to this aesthetic in “Japan, the Beautiful, and Myself,” his acceptance speech for the 1968 Nobel Prize in Literature. 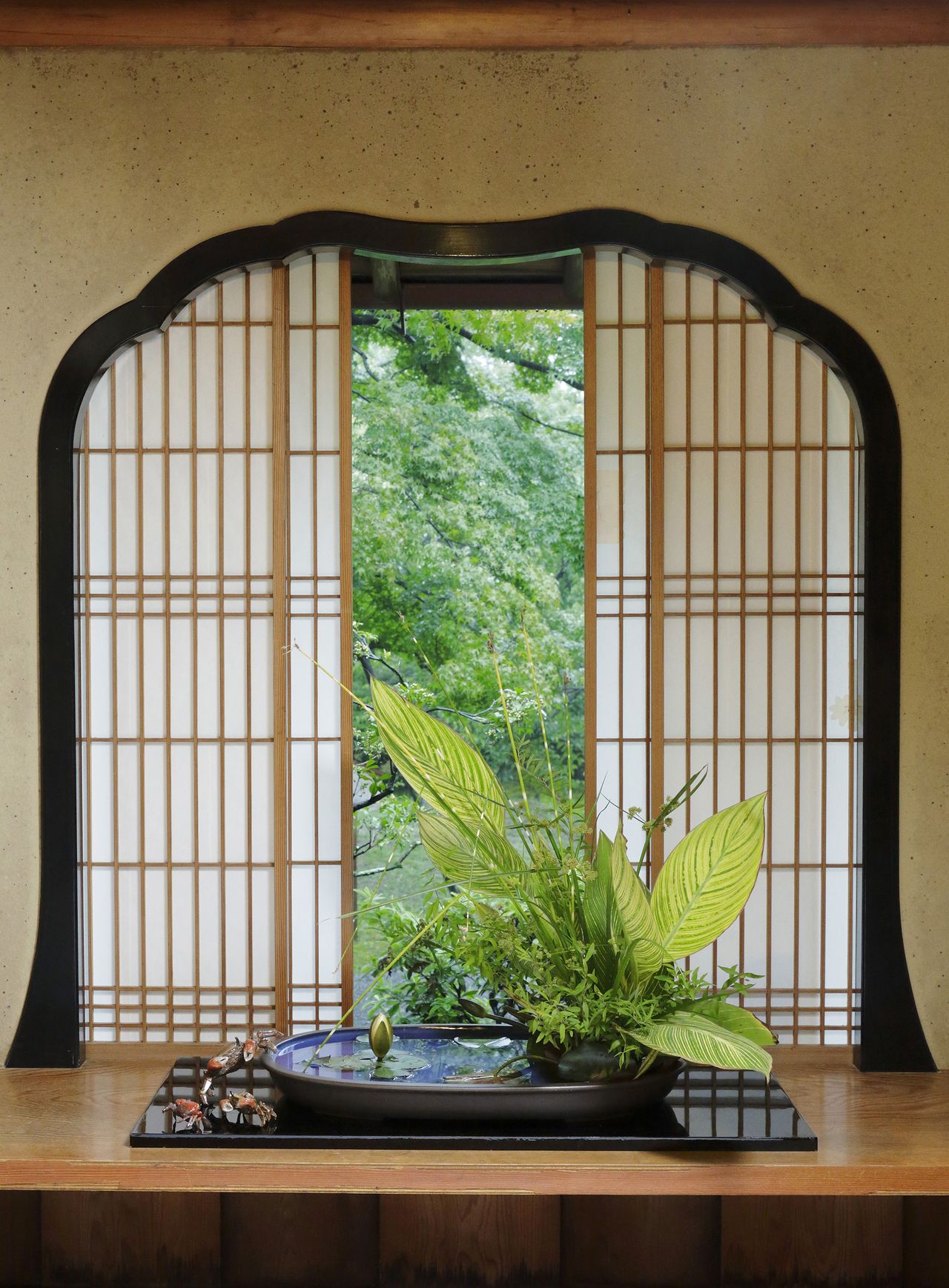 A moribana style of arrangement with “stacked” flowers in a wide, shallow follow bowl. (© Ohara School of Ikebana)

A number of distinct styles have developed over the centuries. These include the original Rikka styling and shōka, using one to three types of floral materials, which first became popular in the Edo period (1603–1868). Other common styles today include heika (vase flowers) characterized by wide arrangements in narrow vases, and moribana (stacked flowers) in wide, flat follow containers. Stones, moss and even metal can be incorporated for effect.

Ikebana emphasizes etiquette and manners, with the central aim being to respect the life of the flowers and to enhance the spirituality of the person who arranges them. Mastering a style takes considerable training and practice, and most people spend years learning from qualified teachers. 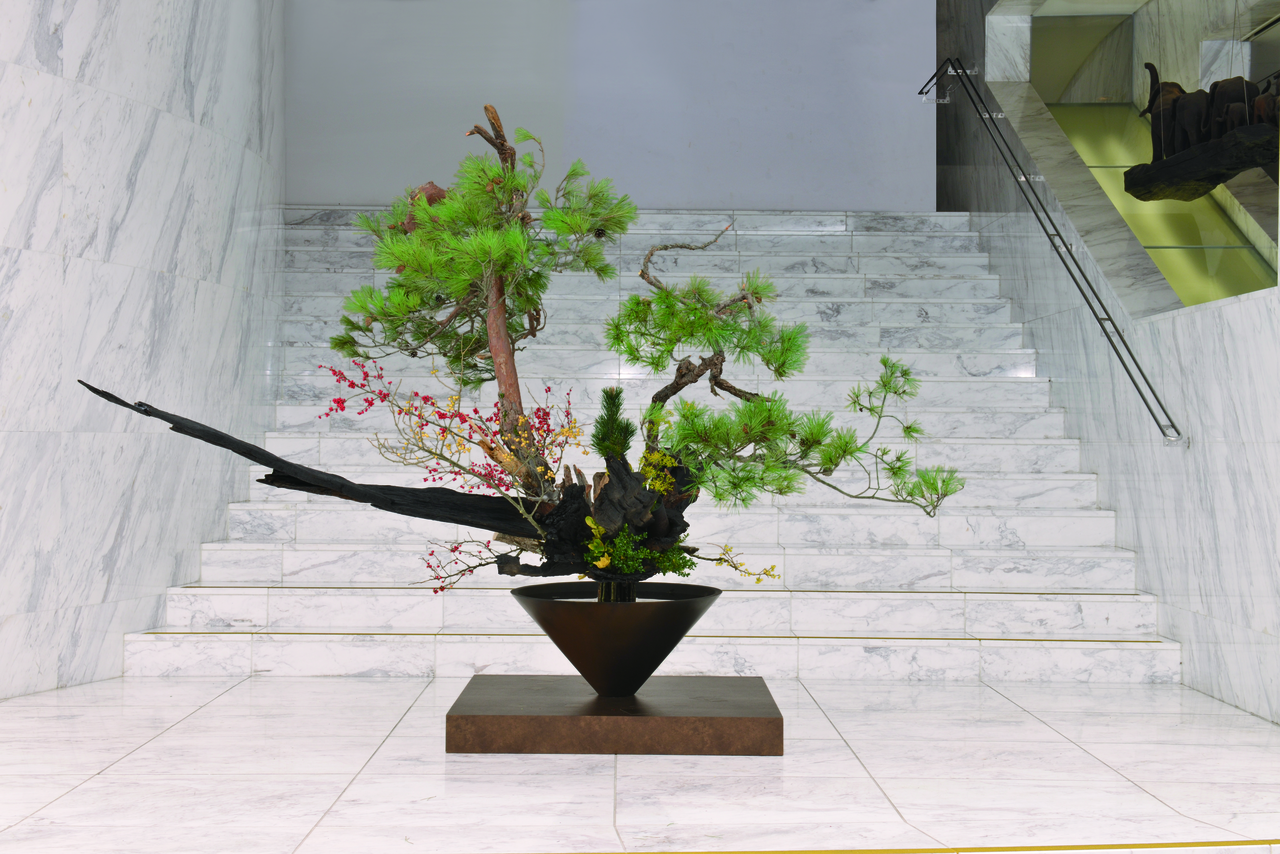 A provision in the Rikka Shinputai style by the forty-fifth director Ikenobō San’ei for a ceremony celebrating the fiftieth anniversary of the Agency for Cultural Affairs. (Courtesy of Ikenobō Kadōkai)

The main schools of ikebana are Ikenobō, Sōgetsu and Ohara. Compared to the 550-year-old Ikenobō, the other two schools are decidedly modern creations, having existed for about a century. Sōgetsu was founded in 1927 by Teshigahara Sōfū and is characterized by respect for individual expression rather than adherence to established styles. Ohara was founded at the end of the 19th century by Ohara Unshin and is distinguished by the moribana style. 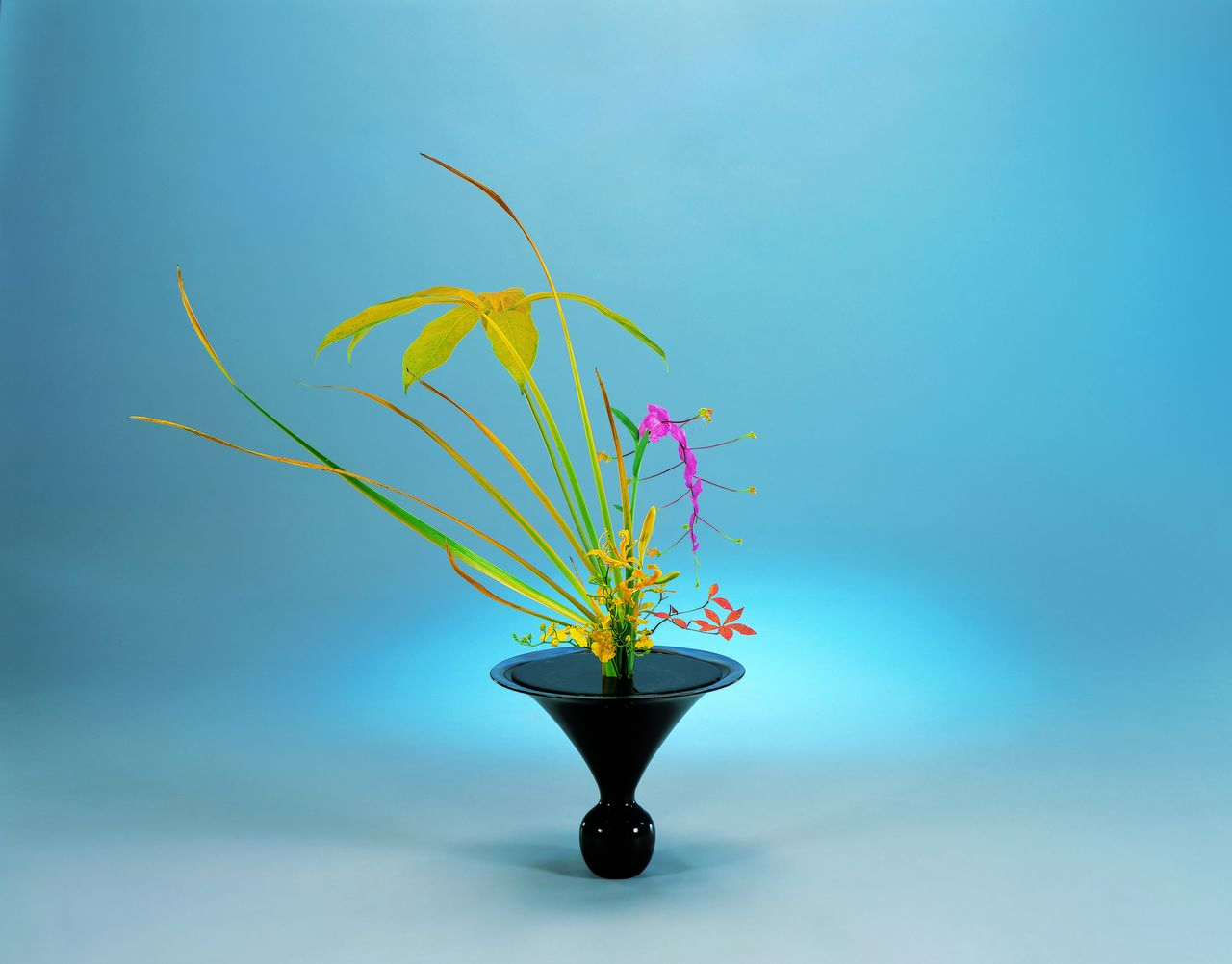 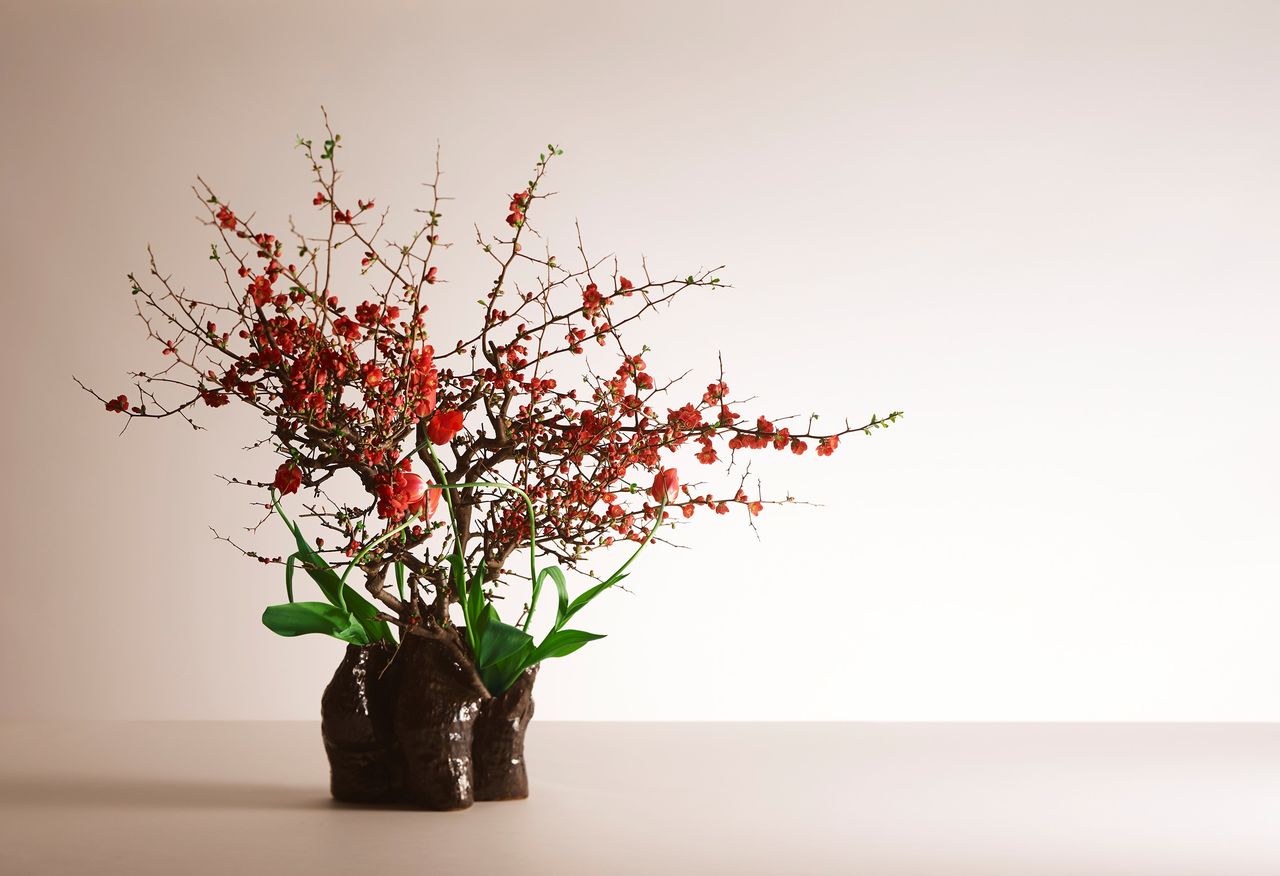 An arrangement of flowering quinces and tulips by Teshigahara Akane, fourth headmaster of the Sōgetsu school. (Courtesy of Megumu Wada; © Sogetsu School of Ikebana) 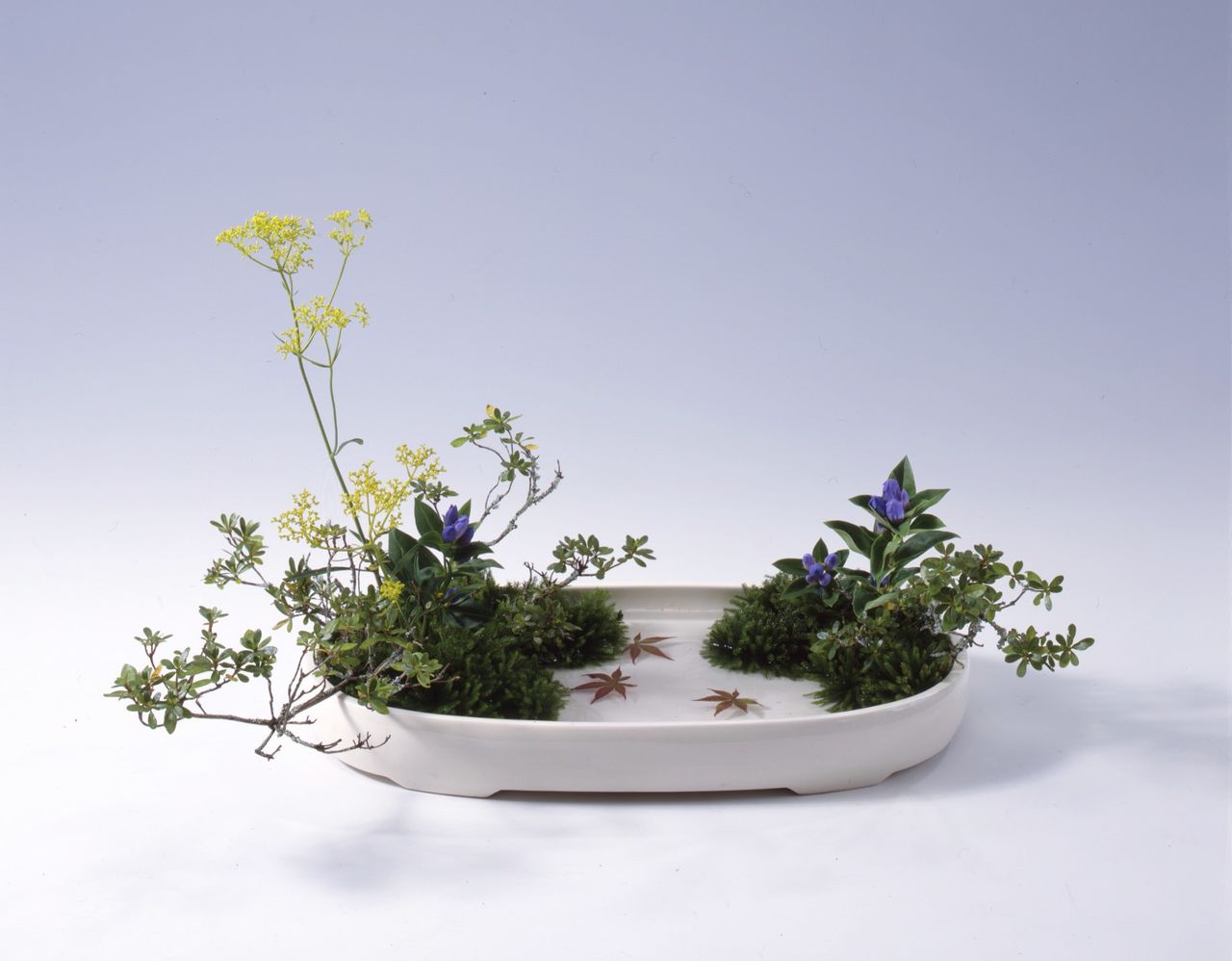 Ikebana classes are available in most communities in Japan, and many schools have overseas chapters as well. As people progress through their studies, they obtain different levels of certification and, over time, can even become fully accredited teachers.

Looking for debt relief? Here’s how a credit counselor can help you