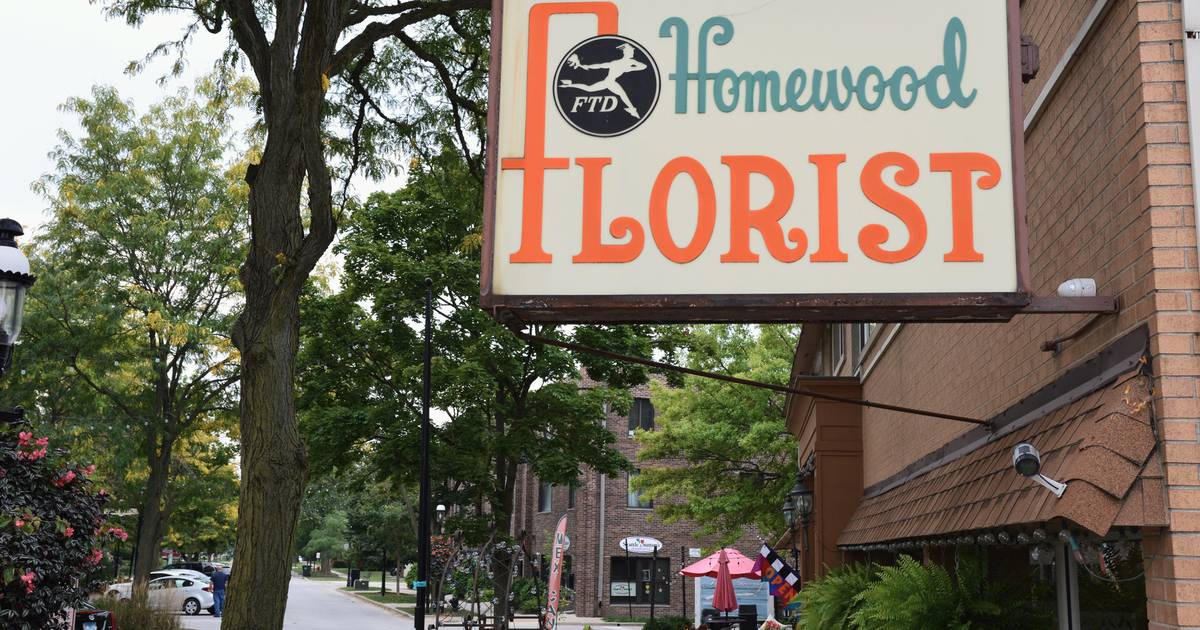 On October 31, a chapter in Homewood history ends when Marty Arrivo closes the door of Homewood Florist for the last time.

Opened by his father, Paul Arrivo, in 1960 on Martin Avenue – an interior one-way street in the center of Homewood that now hosts many of the city’s festivals and street fairs – the boutique has been a common thread in the fabric Homewood commercial. It is one of the few businesses that have thrived in the city’s downtown area for centuries.

The impending closure was announced on September 20 on the shop’s Facebook account. It sparked hundreds of hearts, comments, tears, and shares, but it didn’t slow anything down. Coolers are filled with flowers and arranged pieces await delivery with tags and notes attached. Cascading casket pieces, urn arrangements, wedding corsages and bouquets are everywhere. Until Halloween, it’s business as usual at Homewood Florist.

Arrivo’s wife Kyle, who has worked alongside him since they married in 1985, said they would be busy until the end of the month.

“Our last wedding is October 29,” she said. “Fall weddings are huge now, so we’re doing our weddings for October and then we’ll be done,” she said. “We’ll have a little sale on whatever’s left, and then that’s it.”

Although the work has been constant, Arrivo said a lot has changed in the industry over the decades.

“In the 60s and 70s, if you wanted to buy flowers, you had to go to a florist,” he said. “Now you don’t have to do that anymore. Grocery stores, gas stations, everyone is in the flower business. So now it’s specialized – weddings, funerals, parties, high-end flowers are the reason they’ll come to a flower shop, so you need to be on top of your game. You have to be really good at what you do or they’ll just bypass you and buy a bouquet at the grocery store. We are very lucky to have had a great audience for all these years.

History springs from the walls in the back rooms of the boutique. Arrivo’s office is lined with photos of family, friends, families of friends and employees. In the design area, a particleboard wall dubbed the “Wall of Fame” displays children’s heights over the decades, along with signatures and dates. Brands of hundreds of employees, family members, and even customers are listed. Along with countless Arrivos, the names of another longtime Homewood company abound: Aurelio.

“The reason my dad opened in this town was because he was friends with Joe Aurelio. Joe opened the pizzeria in 1959 and my dad worked for his brother in Roseland in the flower business,” Arrivo said. “Joe said to him, ‘Paul, you should come to Homewood – open a shop in Homewood,’ and my dad came a few months later and opened the shop.”

Arrivo said that at one time or another each of his six siblings worked in the workshop. From start to finish, Homewood Florist is a family business. Those who aren’t technically related seem to stay as if they are anyway.

“We have a small team and they have been with me for a long time. There was a woman who worked here with us, her name was Ann Blum, she worked here for over 50 years with us. She had a work ethic like I’ve never seen in anyone. She was a wonderful person and a fabulous employee,” Arrivo said. “Another of the girls, Kathie Florio, is also retiring, and she’s been with me for 30 years. My daughter was a little toddler at HF, the child development class they have there, and Kathie was one of the instructors. My daughter loved it. Kathie came to apply for a job and my wife saw her and said, ‘She’s the girl our daughter likes. Hire her. And we gave him a job, and here we are.

“When I started, I did counter help, cash register, flower wrapping, customer service,” she said. Now she takes care of flowers for weddings and is considered the expert in the shop.

“I was the wedding assistant for a while,” Florio said, “but now it’s me. That’s my strong point.”

When the store closes, she said she’ll “take a little break, and then, I don’t know.”

As for the Arrivos, they plan to travel.

“We have a granddaughter in Austin, Texas. We plan to hang out with her,” Marty Arrivo said.

Kyle Arrivo can’t wait to do it together.

“It’s time to retire,” Kyle said. “We have our granddaughter in Texas and I go to visit her every month. I can leave and stay; I am very lucky. Marty can only go two nights.

News from the southern suburbs delivered every Monday and Wednesday

They are also planning a trip to Italy.

“We’ve never been to Italy,” Marty Arrivo said. “We planned the trip several times, but business always got in the way. Business always seems to get in the way when you’re in a busy family business. Small business? Are you still there.”

Kyle Arrivo said they discussed the idea of ​​moving to be near their granddaughter, but didn’t talk about it for long. “We’ve been in Homewood-Flossmoor forever. We will stay here, because we have a life here. We’ll just visit Austin more.

“We are not moving,” confirmed Arrivo. “All of our friends are here, all of our favorite restaurants are here, and I love my pizza from the old oven (from Aurelio).”

Clearance sales are starting slowly at Fleuriste Homewood and will continue until the doors close. Arrivo said they hoped to sell all the tchotchkes and baubles they could before the store ended its run, and whatever fresh flowers were left he said would be purchased by other florists in the region. He said they considered the possibility of selling the business, but the right buyer never came along.

“It’s just time to retire,” Arrivo said. “We tried to find a buyer, but it’s a skill set. I couldn’t sell it to someone who has never been in this business. It would be like selling a restaurant without a chef. You have to know how to arrange the flowers, how to buy the flowers, and I just thought it would be better if we stopped it. Retreat and sail into the sunset.

Angela Denk is a freelance writer for The Daily Southtown