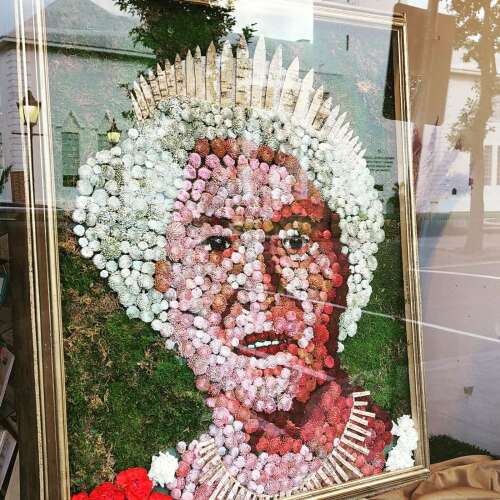 Florist pays tribute to the Queen – The Royal Gazette

A local florist has created a tribute featuring the image of Queen Elizabeth II.

Demco Florist Bermuda’s senior florist, Dustin Francisco, used fresh flowers and foliage to create the portrait which is on display at the Church Street store.

Carmen Phillips, owner of Demco, said the artwork, which is displayed in a gold frame, was made using 25 bouquets of imported chrysanthemums as well as moss and birch bark, and took Mr. Francisco about five hours.

Ms Phillips said: ‘The Queen loved the flowers so much – I was watching the tributes in London and wanted to do something to mark the occasion. I knew Dustin would be on board and he did it with such passion.

“One of the challenges was getting the right flowers to the island on time, thanks to our flower wholesalers in Boston, we were able to get them flown in on Wednesday. I believe Dustin started working on it Friday morning .

“The main content of the flower is the button chrysanthemum which represents longevity in the UK floral arena. It’s perfect because the queen has had such a long life and reins. It was so fitting.

Ms Phillips said the Devonshire store where the work was created was hit by three power outages, which put additional pressure on Mr Francisco to complete the work on time. However, she was happy with the end result.

She added: “It was a very ambitious undertaking and I’m delighted that we were able to create something so beautiful and unique.

“He used different colors to create shadow and depth on his face and hair – It’s quite remarkable – each flower was hand dyed to give it a 3D look.

“People stopped to watch it all day – it was like stopping to pay their respects.”

Ms Phillips said the store had done tributes in the past, including funerals and customers’ favorite football teams.

One of the most recognized exhibits was that of a turtle that caught the eye of floral artisans around the world.