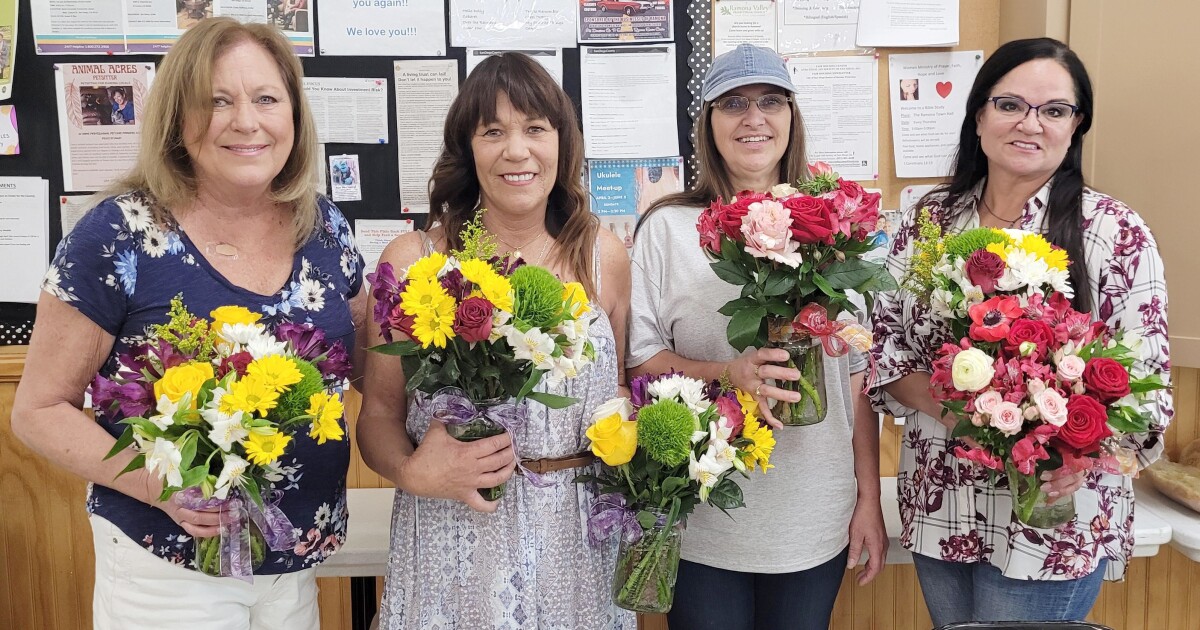 Florist, local club members join in giving flowers to the elderly in Ramona

Even before the start of the Tradewinds Farm Direct Floral Show in La Jolla on March 22, Meyers shared her concerns about launching perfectly good flowers with Susan White, whom she had reconnected with at a Ramona Chamber of Commerce blender in San Vicente Golf Resort last month.

“Susan contacted me the day before the show and was like, ‘Hey, how about giving the flowers to the Ramona Senior Center?’ I said “Fantastic,” recalls Meyers, who also teaches floral design classes at her home-based business Floral Girls Designs.

After the show, Meyers ended up with a package of fresh roses, daisies, carnations, alstroemeria and mums in assorted colors that she couldn’t donate due to COVID restrictions.

“It was all up for grabs – a whole ballroom of flowers,” Meyers said.

The three women collected donated vases and mason jars and put together about 25 flower arrangements. Some of the arrangements were used as centerpieces on tables at the Ramona Senior Center during their lunch and others were distributed to homebound seniors through the Meals on Wheels program on March 24. The next day, the flowers were given to the elderly and other residents to take home.

Lora Cicalo, executive director of the senior center, said the bouquets were a treat.

“These flowers…absolutely brightened everyone’s day,” Cicalo said. “On Friday we had enough to send every lady who had lunch home with a beautiful bouquet of flowers.”

“It brightened my day so much,” said Meyers, who moved to Ramona five months ago after living in San Marcos for 30 years. “For me, it was a wonderful thing. I felt happy inside.

White, a resident of Ramona for 47 years, called the experience “fantastic.” And it was an example of how members of Kiwanis and Rotary clubs can work together, she said.

“Hopefully we can do more projects like this,” White said. “If people want to help their community, they should also approach these clubs.”

Flower bouquets don’t have to be expensive: 5 money-saving tips