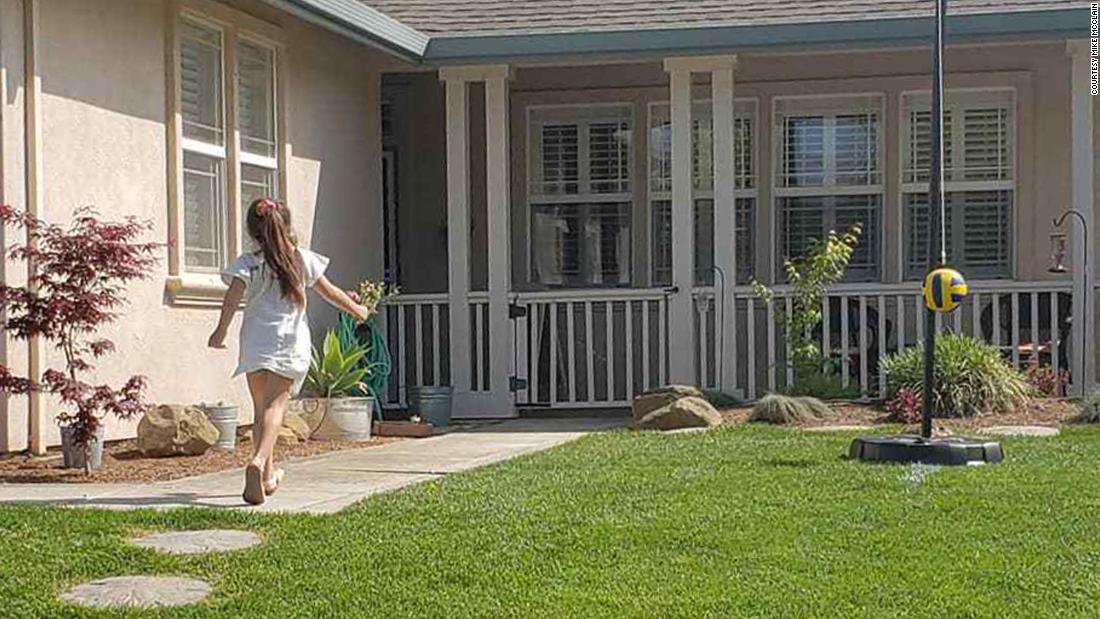 A family in Winters, California leaves bouquets of flowers on the doorsteps of people across town in an effort to spread much-needed joy.

Mike McClain, his wife Michelle and their kids haven’t had the easiest year. Michelle McClain was diagnosed with breast cancer in the third month of her last pregnancy – and while she is now in remission, the mother-of-five is still struggling.

During McClain’s struggle with the disease, the family received overwhelming support from their community. They credit the kindness of the community as the source of inspiration for their floral project.

â€œWe would be home and random acts of kindness would come to our door,â€ Mike McClain told CNN. “We were getting flowers, people dropping off food, people doing more than anyone could imagine to help us while we struggled with what life gave us.”

â€œEveryone needs a little love right now. We got all the attention and love when we needed it, so we thought we were going to spread some of the love that we needed. have received. “

The family of four now spends their days driving around the small town and randomly picking people to leave flowers for. Their 6-year-old daughter Mieka McClain, now nicknamed the “Flower Ninja,” runs quietly, leaves the bouquet on the doorstep, then disappears.

To give Mieka a way to see people’s reactions to her act of kindness, the family leave notes with the flowers asking the lucky recipients to share a photo of her Ninja Flower The Facebook page.

â€œIt makes me happy to see other happy and smiling people,â€ Mieka McClain told CNN. “I like to do it because everyone is inside and can’t go anywhere, and it’s super fun.”

Laura Ray, a resident of Winters, California, said she was on her way home from shopping when she found the flowers on her porch.

â€œIt was so cute and made me smile,â€ Ray told CNN. “I love what they are doing. If during that time we can make people smile, then that is a wonderful thing.”

The McClain family is now receiving inquiries from out-of-state people who have family living in Winters.

“People are depressed, stuck at home, can’t go out, have breakfast or do anything, but they go out to get their mail and find a nice bouquet on the floor,” said Mike McClain. “Male, female, child, anyone who sees it will smile. We just want to uplift them and bring happiness to their day.”

The project, which started as a way for Michelle and Mieka McClain to make people happy when they walked out of the house, is also a way for them to support one of their favorite local businesses.

Kristen Karlen, owner of Roxie’s Flower Truck, said her business had only been open for eight months when the coronavirus pandemic changed everything. Now her tiny flower shop is part of the McClain family’s mission to spread joy.

Karlen obtains the flowers from nearby flower farms, arranges the bouquets and delivers them to the McClains, who then leave them at people’s doors. So far, the family, who started the project less than two weeks ago, have dropped off nearly 50 bouquets.

â€œThey do more than just help the recipient of the gifts,â€ Karlen told CNN. “It helps my flower business, the flower growers in our area where I receive the flowers and all of those people who witness their acts of kindness.”

The florist said she was “thrilled” to be a part of the project, adding that the family has created a domino effect in their community.

Many people have contacted Karlen to ask for bouquets to surprise their neighbors, after seeing what the McClains have done for others.

â€œThis morning, a lady bought some bouquets and dropped them off for the people who serve lunch every day to the kids when they drive lunch in our town,â€ Karlen said. “When we created Roxy, it was with the intention of spreading joy and happiness and that’s exactly what they do.”

One of the people who received flowers from the family, Jillian Ferguson, told CNN that her 9-year-old daughter Lexi found the flowers at the family’s doorstep and decided to start her own project.

â€œShe felt so much joy that she decided she wanted to do nice things for others as well,â€ Ferguson said. “She drew pictures with kind notes on them and delivered them to homes to spread kindness.”

As the virus continues to keep people isolated at home, the McClain family hope to continue spreading smiles, one bunch at a time.