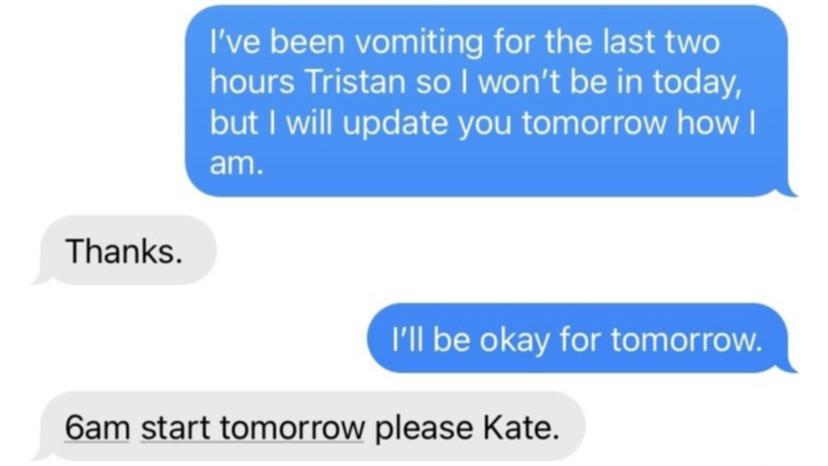 A casual worker at an Adelaide flower supplier has been awarded nearly $3,000 for wrongful dismissal after claiming she was fired for missing three shifts while sick.

Kate Clift had been working in production for Tony’s Wholesale Flowers for two years when she received an email saying she was no longer needed as there was no more work for her.

WATCH THE VIDEO ABOVE: Shocking moment, a small sinkhole swallows up the revelers.

The email, which was also sent to two other workers, arrived on May 4 – a day after Clift was sick for the third time in two weeks.

The company said its reasoning was “the season of events is coming to an end”, however, Clift disagreed and took the case to the Fair Work Commission, saying she was fired for having took an unscheduled leave.

In her application to the commission, Clift said she missed two shifts because she was sick and the third because she was experiencing “trauma and emotional distress” from the burglary of her home.

Clift said she took the necessary steps each time to let her employer know she was not going to make it and was a “dedicated employee” who “behaved well”.

Text messages between Clift and her manager Tristan Smith, published in the commission’s decision this week, show Clift gave notice before her shifts and was eager to make up for missed days.

Clift’s first message, sent to Smith on April 27, read, “I’ve been throwing up for the last two hours Tristan so I won’t be here today, but I’ll let you know tomorrow how I’m doing.”

After initially saying she would be coming to work the next day, Clift then canceled again.

“Tristan, I’m sick again this morning. I felt really lethargic getting dressed and I don’t think it’s a good idea for me to start driving,” she said.

Smith messaged Clift again on April 29 asking if she could come and make up for the missed days.

Commissioner Peter Hampton noted that Clift did not respond for several hours as she was worried about a home invasion she had suffered at the time, however, she did not reveal the break-in to her boss.

When she finally answered that day, Clift said she would make up the days in two weeks. But at the time of her shift on May 3, she again said she was still too sick to work.

In response, Smith said: “Hi Kate, I’ve taken you off the list for the rest of the week so you can focus on your recovery.”

The next day, Smith emailed Clift confirming his dismissal.

Employee accidentally paid over $260,000 takes the cash and flees

Clift’s contract stipulates that no notice was required to terminate his employment. Tony’s Flowers said he let Clift go as he no longer needed her as it was the off season.

However, Clift argued that this was due to the three missed shifts and claimed that she experienced “significant financial difficulty” while trying to find new work.

Commissioner Hampton determined that while Tony’s Flowers may have had an objectively justifiable reason for the dismissal – that work was drying up as the business headed into the off-season – it was not related to ability or Clift’s conduct at work and therefore was not a “reason”.

Hampton also said the way Clift was fired via email was unreasonable and therefore considered it a wrongful termination.

Tony’s Flowers was ordered to pay Clift $2,890 plus pension contributions as compensation.

The florist keeps Victoria in bloom for 110 years! – News from Victoria

My Mosman: Local florist and popular identity, Matt Bisaro shares some of his favorite things.