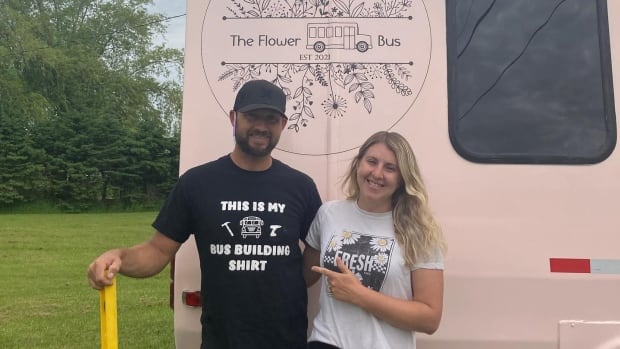 After traveling the continent for years, a military family puts down roots, literally, in Nova Scotia’s Annapolis Valley.

Krista Adams’ husband Brad was posted to Colorado when the two decided to move back to Nova Scotia. They fell in love with the province during Brad’s previous postings at CFB Greenwood.

“We were just done moving around,” Adams said in an interview with CBC Info Morning Monday. In August 2020, the couple bought a house in Avonport out of the blue.

“We were kind of trying to figure out what to do next,” she said, adding that they saw there was a flower shop for sale nearby.

Listen to the full interview:

When Krista and Brad Adams retired from the military, they decided to put down roots in the Annapolis Valley and make a fresh start as flower growers. Krista tells CBC’s Erin MacInnis how they spent this summer driving their big pink “Flower Bus” to farmers markets.

The purchase “didn’t quite work out”, but from then on the couple had the goal of starting a flower business.

They planted a field of flowers on their new property, renovated an old school bus and spent the summer traveling to farmers’ markets in the valley to sell their arrangements.

“[It] just kind of put a whole different spin on the typical type of florists you see in cities,” she said.

The pink bus is equipped with a “flower bar” – a wall of galvanized buckets filled with flowers.

“The idea was just to let people get on board and create their own bouquet,” Adams said. “I kind of wanted to take some of that away from, maybe, the nervousness or not really knowing what to do and just let people have the freedom to be creative.”

Adams said the transition from military service to owning a mobile flower shop was “quite a change” for the family, who moved frequently

“We move around a lot, we’ve never really planted anything,” she said. “I never really wanted to lay out a garden [because] it was always, ‘We’re never going to see that really develop.’ “

Adams said that before the couple decided to start planting in their new home, they didn’t know much about growing flowers. So they did a lot of research, including reading books and taking a six-week floriculture course.

“This year, in May, we really started to get into it,” she said, adding that the couple also learned through trial and error. “As with any type of agriculture, there will be certain seasons when certain things work better than others.”

She said the recent heat has been “trying” – the flowers have needed a lot of water.

The bus has been traveling to Windsor Farmers Markets, but lately Adam’s says they’ve been staying closer to home.

“It seems like a lot of people like to come to the real flower farm,” she said. “I’ve had quite a few people who just specifically pushed down [from the city] just to see the bus, so that makes us really happy.”

Adams posts the daily location of the bus on his Instagram page: theflowerbusns.

Sustainable Wedding Flowers for Every Budget in 2023 – Royal Florist