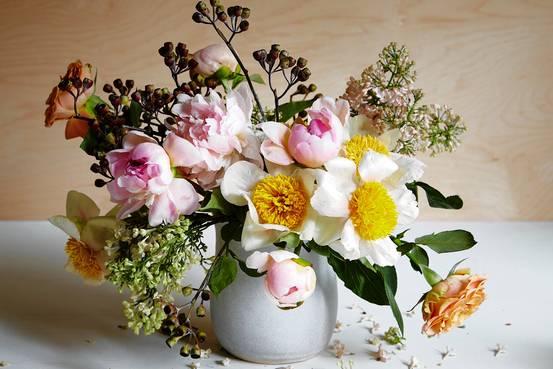 Initially, it was the seductive colors of this self-portrait by Arshile Gorky (1904-1948) that led me to consider it as the inspiration for June’s arrangement. However, it is difficult to miss the deep melancholy of the work. Gorky, an American of Armenian descent, based the canvas on a photo of himself and his mother taken seven years before he died of starvation in 1919 as a result of the Ottoman Turkish attempt to displace and eliminate the Armenian population. . It is dated “1926 to c. 1942 â€, because Gorky tended to slowly stop working on paintings. He found the idea of â€‹â€‹finishing a play too definitive.

To reflect some of the vibe and color of this Cezanne and Picasso-influenced masterpiece, I focused on the romantic and sentimental flowers in their June heyday: full pink peonies and simple white varieties. with yellow-orange centers; cream and mauve lilacs and taupe roses, bearers of a memory; and the browning of eucalyptus pods reminiscent of the more earthy tones of painting.

I cut the peonies to different lengths to mimic the figures, placed them in a simple white ceramic vase, and then added elements of height, rhythm, and texture. Leaving flowers cascading over the rim of the container gives a more elegant and satisfying look. Don’t be afraid to drop flowers almost to the table. It helped me to grasp the sense of loss that Gorky’s work exudes.